End Youth F.C is the oldest youth football club in Coleraine, founded 26 years ago is on its way back after an absence of 11 years. East-End over the years has had a incredible record of success and has brought back many titles to the Borough of Coleraine, including two trophies from Holland in 1997. 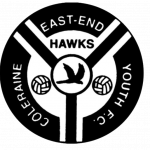 © This website has been created and developed by the management committee of East-End Football Club.